The dense morning mist throbs with birdsong and the sounds of creatures waking throughout the valley of San Ramòn. In the pregnant air of this Galactic Hawk full moon of the Mayan calendar, five large hawks hover, beating a greeting with their wings directly in front of me as I sit here drinking my agua de pipa.  All of Life seems to be hovering in this same way.

I’ve sensed that what happens in this country greatly affects the whole planet and perhaps reflects it in condensed form as well; this is a nexus of some sort – a hub and a high point from which impulses flow to the rest of the Earth.

Costa Rica always splits my heart wide open with pain and magic – the last time I was here, I left feeling such heaviness for the Land; what was set before me was a legacy of abuse and violence toward all that is feminine….

The teachings that are rising these days are hard ones, about releasing learned judgments and so freeing ourselves from the bondage of a brittle heart… about the fear from which our judgments erupt – the fear of not being able to survive on our own – and the opposite and growing fear of being swallowed up by the Shoulds of Tradition and Survival.

To not judge – to receive Life as it presents itself to us – is the challenge to keep our hearts open despite it all…. despite the obvious and massive “development”, the systemic corruption and hypocrisy, the “American values” of sex, drugs and rock’n’roll spreading through the country…. How can we keep our faith in Life in the face of all this?

Gloriana’s cousin + his cohorts have paid off every level of government official so that laws meant to protect the land do not stand in the way of their making money – the tree that the toucans nested in (see: https://dawnbramadat.wordpress.com/2010/10/19/protecting-paradise/)  was cut down to make a highway that now runs all around her farm, right next to the high, ugly cement wall that they’ve erected. They have even leased several fantastic works of the Costa Rican sculptor, Jorge Jiménez Deredia, famous for his connection with the indigenous people of the Americas and his “Camino de la Paz”, to lend an air of political correctness to their project – in five years, when the damage has all been done, the sculptures will be returned to their creator.

The Jordanian owners of Del Monte are proudly sowing millions of acres of genetically modified bananas and pineapples so more Costa Ricans can feel grateful for low-paying jobs, handling pesticides all day in the sweltering sun.

Costa Ricans woke up one morning in 2010 to find that Nicaragua had “invaded” a piece of borderland in the north – the San Juan River delta wetlands, a protected biological sanctuary, was simply taken over, and Nicaraguan history textbooks rewritten to make it seem the area had always been theirs. Attention having been drawn to the region, aerial photographs started appearing on Facebook, showing that large parts of the purposedly protected land had been drained dry and poisoned by pineapple plantations. The government of Oscar Arias (the most shameful Nobel prize ever awarded) and Laura Chinchilla, the woman Arias hand-picked to prove that women should not head a government, has been in bed with Chinese interests for years. An off-shore mega-port is planned, off limits to the strong Costa Rican unions, to be built by the Chinese in order to ship out petroleum that is to be pumped from the land by the once nationally-owned oil company, now in “partnership” with a Chinese company (It makes me wonder whether Arias and Stephen Harper have ever sat down and chewed the fat….). The Dalai Lama is no longer welcome in Costa Rica – does that not say it all?

When you ask Costa Ricans about corruption, they shake their heads and say “It’s everywhere”. I’ve met so many employees of state and corporations who feel morally compromised by what they see all around them, but are terrified of losing their jobs if they stand up and say anything.

About half of the women I’ve seen have had “modifications”. Plastic surgery and a current fashion for radical hysterectomies have been combined in a package deal offered by the obstetric industry: you schedule your C-section according to, say, the zodiac sign of your choosing or in between business meetings, and for the same lowlow price, you can get a tummy tuck and your hair and nails done. You can then swagger out of the hospital, a billboard image of perfection, and hand the inconvenient bit of life in your arms  to the waiting nanny….No muss, no fuss….

Catholicism has been ingrained, scrubbed deep into the bones of the people here – you can hear it twisted through every phrase: God willing; Thank God; By the grace of God; May God be with you always; God bless…. His name invoked like beads on a rosary, automatically – obligatorily. Very few of the people I see are practising Catholics, but the words remain like vestigial organs, somehow escaping the evolution of consciousness….

Through all of this seep the enduring creative energies of the Earth….. 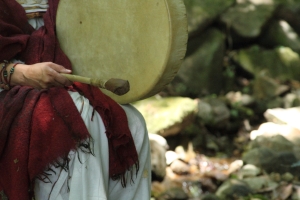 a mountain grove beneath mysterious megaliths, near endless tunnels.  Dolphins leap and dance though the wake of the boat when I ask them to come and play; a whale flips its tail and manta rays fly through the air. Hawks swirl around the house on the side of the valley throughout workshops and sessions. A long-ago child’s prophecy is unwittingly fulfilled as I place a crystal heart in the centre of a medicine wheel and we pray for peace.

Huge tracts of land are being bought up, to be saved from development by eco-villages and concerned individuals. A short walk from the home of one of my hosts is a jewel – the Corteza  Amarilla, a hotel-restaurant… more of an art installation, really, that changes completely

every three months…created  by Jorge Salgado with the most surprising recycled materials (thermoses, bed frames, shoe molds..?!).  Up in the mountains, he has built a retreat cabin in the same creative vein– the beginnings of a small community established to protect the surrounding land from further deforestation. A new centre is also being created in Orosi, where at the turn of the twentieth century a community existed, based on teachings of Yeshua that had been found hidden in the Vatican. I have a strong vision of this first community as an energetic template for the hundreds of others now blossoming throughout the country.

Serendipities and impossible confluences become too numerous to count…. “Magic is in the air – the Goddess is afoot”….

I am so deeply grateful for the generosity of spirit with which I have always been welcomed here, from the very first time more than twenty years ago.  Throughout this visit so many wonderful homes have been opened to me, from beach to mountain and farm to city. I am finishing this message from a grande dame in the historic centre of San José – a home that

remembers the founding of Costa Rica; researchers recently found a draft of the first constitution of this country in the treasure trove of books and manuscripts sequestered here amongst the lives and memories of Doña Dora and her family.

Birdsong once again saturates the air as the sun appears over the mountains that embrace the urban spread of the Central Plateau and I gather myself for the last stretch of appointments and meetings before my return to Quebec. Smells from the kitchen tell me that Elda has begun frying onions and garlic for the gallopinto; I hear the clack and clatter of the first train passing.

We have moved into the influence of the Solar Jaguar Moon and the Spring Equinox – an uncontainable joy seems to permeate every cell of my being and every drop of Existence. 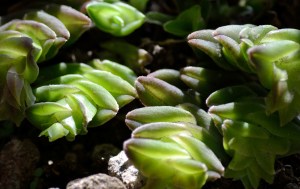 (photos from Lina Lachner and Irene Saborio, with gratitude… )