Many years ago, I found myself driving through the dark northern wilderness of Manitoba, following a call of Spirit to what turned out to be a 7th Fire Prophecy Ceremony for the Anishnabe, who were understandably surprised when I showed up….from Quebec…. Although I had a slightly better idea where I was going yesterday, it was in the same magnetic way that I was called to the welcoming ceremonies for the arrival of the Nishiyuu Walkers in Ottawa.

I drove over the bridge leading to Victoria Island in a strange state of shock; passing the Domtar factory and the Chaudière Rapids I was transported to the same names, the same scenes, from the Chaudière-Appalaches area of my Heartroot home…. Transfixed, I drove right over the bridge and into Gatineau the first time ‘round. I turned back and found the Idle No More sign on the opposite side of the bridge from the Domtar facility and from an immense bunker-like building that I was soon told was the new Canadian War Museum – people arriving to welcome the Nishiyuu Walkers were directed there to park.

I arrived early, so was able to witness the gradual arrival of more and more people on the other part of Victoria Island – a ceremonial site for the Algonquin people for thousands of years. The gathering crowd was perhaps eighty percent aboriginal …and Everyone had a camera, a cell-phone or a microphone in hand. We all knew that History was being carved deeply that day into our hearts and into this land. Parents and grandparents from all over the country had brought their young ones so one day they would be able to say, “I was there!”

appeared first, and then the white coats swelled over the horizon. The crowd embraced them as they flowed down the hill and into the site, relieved, proud and exhausted. I stood by the ceremonial fire lit to welcome them, was present for the pipe ceremony and heard the prayers offered and gratitude expressed in low voices by the Cree and Algonquin elders to the original seven Walkers. As the elders prayed and passed the pipe, I found myself absorbing the energies and prayers of the crowd – it was as if it all gathered into my heart, and then down through my body and out my feet, as a gift to Mother Earth. When the ceremonies were over, the Walkers were finally allowed to enjoy the feast waiting for them. Women singers with frame drums alternated with men drumming and singing on a big pow-wow drum….and then the last leg of the Journey of the Nishiyuu began as the Walkers, replenished and renewed, passed the sacred fire in single file and we all made our way from this holy place to Parliament Hill. 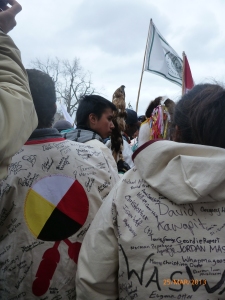 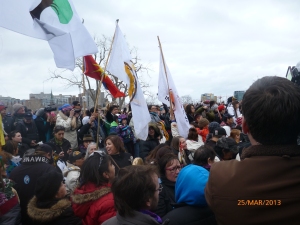 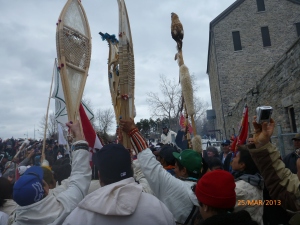 The elation I felt on seeing the crowd already gathered in front of Parliament, waiting for the Walkers’ arrival, gave me a glimpse of what these young people must have felt throughout their journey as they were welcomed by growing numbers of well-wishers from community to community over the past three long months. They had left following a vision, on the coldest day of the year (-54⁰C is cold, even in Whapmagoostui!), and in walking had healed themselves, their communities, and the Land on which they walked in reverence. I tried to imagine how they must be feeling as they approached their destination here in the South, surrounded by mass consumerism, construction and people in suits.

They were shy, emotional, humble and deeply, deeply inspirational as they spoke to the crowd of Nishiyuu – of The People – in whose name they had undertaken their journey. 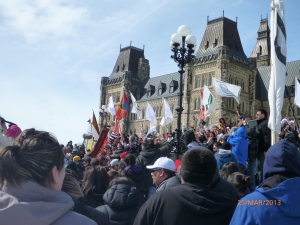 They came with stories of sorrow and suffering and of healing and renewal through the old ways of knowing and honouring the Earth. They spoke of strength in unity and called for the revival of traditional wisdom to heal the Earth and ourselves. After the original young men spoke, the youngest Walker was introduced: Abby Masty, 11 years old, dreamed she was to walk for the Women of all First Nations and all cultures.

The Walkers stood as shining Humans in their full potential, and we were all uplifted by their example. I remembered the prophecy that the Red Race would be instrumental in bringing the Earth back from the brink of destruction in the End of Days, and began to think that this is how it will be accomplished….

As I left, the People – Cree, Algonquin, Innu… Canadians of all backgrounds and probably some tourists getting a great deal that day – were uniting in a round dance.  Magic was woven of the powerful, loving intentions of the Nishiyuu. The politicians may not have been interested in listening, but Mother Earth heard….

Megwitch for the many joyful hugs shared.
Megwitch to the beautiful woman from Mistassini, who shared with me her story of loss, and that walking the way of Mother Earth does help.
Megwitch for the voices of the People, and their strength.

As I got my car from the War Museum parking lot, I reflected that I had at first thought it ironic, parking here to be able to go to this gathering. Now, it seemed to make sense…. Upstream from the bridge is the plundering and destruction of Nature represented by Domtar and the  culture of war memorialized in the War Museum. The Chaudière Falls crash and roar – Life as a torrent of physical power. Downstream of the Portage Bridge,  the Ottawa River becomes calm and deep, the Algonquin people continue to honour their Oneness with the Land and All our Relations and new kind of warrior is being birthed, whose strength and wisdom flow from that same Oneness.

It was rush-hour when I set out to return to Montreal. As the traffic was snarled and jammed, I deeked onto a side street where I saw an “Open” sign in a café window. “Why not?” I thought,”I could use a tea right now.”  From the jumbled announcement board to the left of the entrance, a phrase jumped out at me: Kee-zag-ghin = I love you in Algonquin. Below these words was the photo of a young woman, Moe Clark, who had spent time at Heartroot while I was away in February. My daughter, Kyra, had performed in this same café with Moe….

Can Life possibly be more magical?

For more photos and background on the Nishiyuu Walkers:  http://kolonialq.wordpress.com/2013/02/13/journey-of-nishiyuu/

This entry was posted in N.America and tagged Idle «No More, native pride, return to traditional ways for healing, The Journey of the Nishiyuu. Bookmark the permalink.