April 6, 2014:  Last night, traffic crawled through the centre of San Jose. PAC-PAC-PAC! tooted horns of flag-festooned vehicles making their way along streets lined with yellow-and-red supporters of all ages, from babes-in-arms to the elderly. It already felt like a celebration.

This morning dawned cloudy for the first time since my arrival almost two months ago; it was not until noon that the sun began to burn away the chill, and you could feel the country inhaling deeply in expectation. All the streets around Roosevelt Plaza were closed off. What had started for many as a glimmer of hope – a worn-out spot in the patina from greased palms, a crack in the lacquer of cynicism, a falter in the bully’s sneer – had united the nation as the People demanded change.

T-shirts declaring “I am the future of my country” came in all sizes and 2 colours. Throughout the day, the fiesta in the Plaza and the Heart of Costa Rica swelled with music and honking horns and dancing people…. There was no angry, raging rhetoric – no bloodshed or even the barest threat of violence.

The televised proceedings could be heard everywhere in the streets of San Jose once the polls closed at 6pm. The elderly father of Luis Guillermo Solis, the schoolteacher poised to run the country, was asked what he had to say to his son as he voted – and he replied that he just wanted him to promise to be honest. People from both sides of this exceptional election process were smiling….relieved, it seemed.

When the final count was announced by the president of the Electoral College, 77.7% of the vote had gone to Solis (revised later to 77.8%) – the largest majority win in Costa Rican history. As a Canadian onlooker, I was startled and amazed to watch the President-elect

surrounded suddenly by a sea of green and white. Members of the opposite camp laughed, shook hands and embraced Solis as together they sang songs of national pride.  The representative of the Liberation Party read a long and dogmatic statement, then questions were asked in a press conference, but everyone was waiting for the new President to address the people of Costa Rica.

When he did, it was one of the most inspiring political speeches I have ever experienced. No papers and podium, no teleprompter – he simply stood and spoke to the nation. I was prepared for the kind of political pablum we get in the northern part of the Americas – Heaven and Earth forbid: I’d become cynical….

The promises to shepherd the country into a new era of governmental transparency and national prosperity, but never at the expense of the human rights of any citizen, or of the integrity of the environment, I had heard before with jaundiced ears. But something was different here. When Solis then declared that animals would no longer be mistreated in Costa Rica, and called them our brothers and sisters, the crowd in the Plaza exploded in accord and my heart split open. An unknown Tica came and drew her arms around me – why was I sobbing?

Why does this election in Costa Rica touch me, a Canadian, so deeply?

A sign in the Plaza read: “I dream that Costa Rica becomes Costa Rica again .” President Solis stated several times that the nation was returning to its original ideals and values – to its former identity and pride. How many of us in Canada dream of having our country back, the reins finally pried away from corporate clutches and messianic malfeasance? 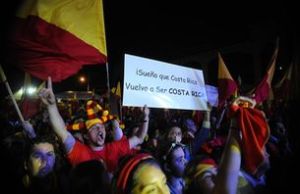 The parallels to be drawn between the Canada and Costa Rica are numerous: the wealth of natural resources, former peace-making reputations as Nice People, the infiltration of the United States in all aspects of society, rampant corruption in all sectors, the People finally demanding change – and Canada also has a schoolteacher who may be about to lead us out of it all ….

I return home in a couple of days, carrying with me the faith that The Time has come, and the change for which we yearn, from the Osa Peninsula to Iqaluit, has already begun.

April 7:  Today, in the drought-parched land of Costa Rica, in the air of Roosevelt Plaza, still sparkling with the rebirth of a Nation, the rains came… and everything is Life!