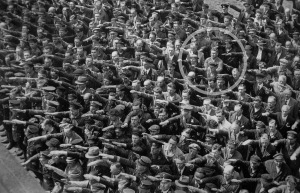 I don’t think I’ve thought of myself as a coward before.

As a matter of fact, I think I scared the bejeezus out of my family more than once due to the…naive abandon?…with which I have comported myself throughout this life.

But “coward” was the word I was screaming silently at myself in capital letters as I stood in line in front of one of those radiation pods – the scanners that you walk into and put your hands in the air (“Don’t shoot!”) as glass doors slip shut around you – at the Hartsfield-Jackson Atlanta International Airport.

In the past, I’ve asked for a pat-down check rather than go through this type of scan – yes, perhaps mostly on principle, although Who Knows really what sort of radiation they are bathing you in. Here, there was an obvious option for a walk-through scan – I saw a customs official herding a few passengers through it – so I asked the same fellow whether I really had to go through the pod. He replied “Yes”, without looking me in the eyes…and I let it go…! Coward!

I was worried I would miss my flight – I only had another 30 minutes until take-off, and I’d no clue how much further I had to walk to get to the gate. If I made a fuss, they would have to call someone to do a pat-down – or maybe they would take my refusal as suspicious, or it might simply have provoked them – Little People with power….* I was not interested in the prospect of a cavity search.

Either way, continued resistance on my part was potentially going to jeopardise my getting on the plane home. Ron was picking me up at the airport….I remembered how worried I was when my son didn’t show up on his flight back from India. As Ron is the anxious sort at the best of times, I didn’t want to risk not showing up and giving him a heart attack – even metaphorically.

But all of this felt like lame excuses. It was my right to refuse the full-body scan. Was it a moral obligation to do so, if only in order to model something other than blind and absolute compliance?  I was acutely aware of what country I was in, and not terribly comfortable in this awareness….

This was the third time I had had to wait in line on the complicated trajectory to my next flight. I had scurried to this line from another one, in which I’d attempted to stay calm as the minutes ticked by, clutching my photo-adorned customs questionnaire that had been printed at a kiosk reserved for “American” citizens (“Oh… and Canadians”, the flight attendant had added as an afterthought when walking us through the process before we debarked.). The queue for the kiosk was marked “U.S. Citizens”, and when I flashed my Canadian passport questioningly at an official I was very firmly told that this was where I was to go. The guy in uniform who eventually scrutinized the document looked me in the eyes and said, pointedly, ”Welcome home!” as he let me pass. I hesitated, but I said nothing!

Instead, I hustled myself along, my mind scattered in surprise. A cursory mood assessment told me that I would most likely not have been able to say “No, I am NOT home – I am Canadian, NOT from the U.S.” in a tone that would not offend. Had he been daring me to say something (“Make my day!”…)? My too-informed mind scuttled over all the damage that Stephen Harper’s dictatorship has done to Canada – perhaps the worst of which has been his attempt to redecorate Canadian society with a Stars and Stripes motif.

The United States of America has hijacked the word “American” the way Christians hijacked Jesus. Many friends of mine in Latin and South America are royally peeved at this – anyone living in either one of the American continents is technically “American” (and Jesus was a Jew, speaking to his own people and recognised by Mohammed as his predecessor). I was returning from Costa Rica – was there now a policy to officially consider Mexicans and Canadians as “Americans” – part of onebighappy North American Free Trade Family?

This is what was bubbling in my brain as I raced to the next line of irritated in-transit passengers, and confronted The Pod.In the end, I was scanned with the rest of the herd, and made it to the gate 10 minutes before they started boarding.

I’ve decided to take this as a learning experience – another kind of a scan, if you will – on a theme of the flexibility of priorities. And next time….well, we’ll see….

* By this, I mean people who have been taught that they are little and powerless….