Posted on December 7, 2014 by dawnbramadat

So…I ask you once again: how are you digesting the goings-on around this planet of ours lately?

I know that I have found myself frequently floating in space-time, somehow feeling everything that is happening and aware of adjustments occurring in my whole Being. A rewiring is going on that is manifesting in heightened prescience, intensified visions and my apparently showing up in others’ dreams and meditations even more than usual. The intensified solar flares that were expected by scientists for the end of 2012, and predicted to potentially endanger the entire electrical grid of the planet, are occurring now instead, and it is not the man-made electricity that is being affected, but rather the “wiring” – the central nervous systems – of all living beings. We’re being upgraded, if you will, to Human 10: on Gaia 5D….

Many of the prophecies that we grew up with became defunct after Consciousness on the planet reached critical mass and we decided a different destiny than the Apocalypse.  There are others, though, in all cultures around the world, that speak of renewal: the end of the darkness of the Kali Yuga and the emergence of  the “golden age” of Satya Yuga; the birth of the Fifth Root Race of Humanity, when we remember who we really are….

The arrival of New Life is a messy affair. What remains in the belly that has not yet been released and no longer serves will be expelled as we open ourselves and squeeze through the birth canal, strengthened by the passage. Mother and baby are birthed together, and what makes all the difference is the balance of faith and fear. We are able to give birth on our own, letting Nature simply be, but the solid, loving presence of another woman diminishes the fear and eases the way. We are indeed attending our own birth, but it is essential that the feminine energies of the Circle…of Oneness and compassion…be present, and given a place of honour.

There are challenging potentials looming for this particular birth, of a new reality on this Earth…of a new Humanity. Injustice that has been endured with tightened jaws and hardened spines is now exposed in the meeting places of the people.  We are heavy and weary – it feels as if we are overdue and the temptation is to panic and provoke, forgetting that birth will flow when all is in place.

The recurring image of a dying reptile – the Old Order, thrashing wildly and indiscriminately with its last breaths, has intensified. The hierarchies are not easily relinquishing their power, and seem to be intent on taking down with them as much as possible of the reality in which they are invested. If this sounds unconscionably obtuse – 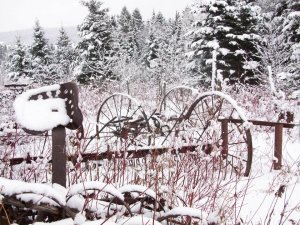 well…potentials are, after all, just that, and may never actually have to be dealt with.

The Peace that descended on Heartroot a couple of years ago (in preparation for the events in Megantic ..?) has remained, strengthened. Greater numbers of people are finding their way here to rest in this peace, to lay down their burdens and then return to their lives, renewed. The silence of the Winter season brings the potential for such profound reflection, if we don’t get scared and run away….

From the heartrootedness of this place, I send you much Love and many Blessings, whatever your Path may be, and wherever it may take you….

This entry was posted in Uncategorized and tagged death of the ol order, Fifth root race, intensified solar flares, Kali Yuga, Megantic, peace and refuge, rewiring of the human nervous system, Satya Yuga, silence of winter, what was expected in 2012, Winter Solstice. Bookmark the permalink.