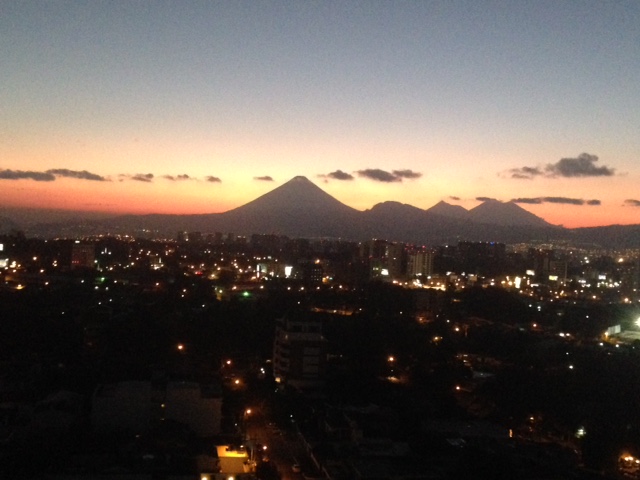 Guatemala was wearing a mountain-hugging, velvet black, sequined number when we met again last month – I’m prying the image now from the rock and debris of my minefield of memories.

Bombs may not be dropping from the military helicopters thudding warning rhythms as they suck the light from the city skies, but it is a war zone, nonetheless. Volcanoes puff away, erupting every now and then like adolescents. The wealthy have converted their cars and bodies into armoured tanks so they can pretend nothing is happening. People just move on…

I’ve had this experience before, I kept feeling, and now I remember – skirting around an apartment, my soon-to-be wasband seething barely controlled rage. Step carefully. Don’t look him in the eyes. Get out fast. It comes back to me that I was told, in the 70s when I first came to Guatemala, to never set foot in the Ciudad….

The Christian god is everywhere – on billboards, buses and hopefully-named enterprises; his love and power are proclaimed and pleaded in pretty well equal proportions. We pass an immense, sparkling structure that my friend says was made to resemble a dove from above, but to the mere mortal approaching it looks more like a giant flying saucer, promising escape from the City and its concussing realities. I am told that 8,000 devotees can be seated in this structure, and that another church in another shade of Christian doubles this capacity. I think I’ve had nightmares about it….

Campesinos flock from the countryside to the city to become maids, drivers, factory workers… bringing brilliant colour to the oh-so-tasteful neutrals and receiving some slight shelter from economic inclemency in return. The two species sort of coexist: the small, colourful, wary and silent ones flitting around the big, loud beige ones, most who have bloodlines traceable to Europe a couple of generations ago – sometime around WWI and II….

The presence of the indigenous culture soothes the city’s conscience – see? They weren’t all killed, after all! I am told over and over that they didn’t know! There were news black-outs, so only those who regularly accessed foreign media had any idea of the massacres, the atrocities. “The soldiers had no choice”, I am told by some. We believe what we need to believe. I am reminded inevitably of Nazi Germany….

The condition upon which I agreed to return to the country was that the teachings were to be unsegregated – available to both indigenous and colonial Guatemalans…. It was an adventure for all, making the two social strata visible to each other, with the potential for seeing the Other as fully human…. I am so grateful for the experience, although I believe I floated through it a lot less aware of the internal chaos it caused than were the participants.

Outside of Guatemala City, the rules change. The colourful little birds are on their own territory here, and become bolder, louder…. Where tourists gather, their eyes change and they peckpeckpeck at you until you bleed money. I was protected in Chichi(castenengo) by my Heart Sister, Poxita – eldest daughter of the traditional Mayan priestess-healer who welcomed me into their family compound. The colours and patterns, sounds and smells of the market are spectacular…dizzying – I was so overwhelmed that I even forgot to take photos! Poxita instructed me on what has been dyed a certain way to be sold as an antique, or what would fall apart with very little wear; she helped me buy a beautiful bag from a woman who gave me a fair price.

Poxita glides through the market as she does in Life, spreading Light around her, exchanging warm salutations with her community. She and her mother turned back to their traditional ways after The Violence, to heal themselves and their people. In their dark, smokey altar room, multi-coloured candles hang until they are burned as offerings along with cocoa, conifer resin, flower petals and prayers. Although images of the Virgin are central to the altar, and Dios is called upon a gazillion times in daily parlance (Gracias a Dios; Si Dios quiere; Que Dios te bendiga….), ceremonial offerings are to Mayan deities of time, the directions, and the landscape. I am honoured to be invited to participate in ceremony, and in the following days, to help in healing work with the Nanas’ clients and family members.

Poxita undertook to chaperone me from Chichi to Lake Atitlàn, a gesture the generosity of which I underestimated at the time. Travelling by chicken-bus brought back vividly emotional memories of my first bus trip to Guatemala decades ago, and how the people had protected me from the fate of other foreigners (robbery, deportation, rape) by hiding me in their midst. Three buses, a boat-trip and several hours later, we were met by Caroline Godoy and taken up the side of the mountain outside of Santiago de Atitlàn. She and David Mikulenka, her partner, and their daughter, Maya, are undertaking the manifestation of a dream on this hill overlooking the sacred lake. They are constructing what they call a Temple of Illumination on the hilltop – remaining stone ruins, the location, and that tell-tale prickling sensation in my centre all lead me to believe that this is not the first time this has been a place of worship and connection. The Temple is not fully finished, but is breath-taking as it is – crystals in the three spires light up one by one as the sun makes its way across the sky, and when they do, the structure truly merits its name….http://www.ulewatitlan.com/?page_id=61

David is an artist and visionary – he has sculpted dragons in the Temple, on the roof of 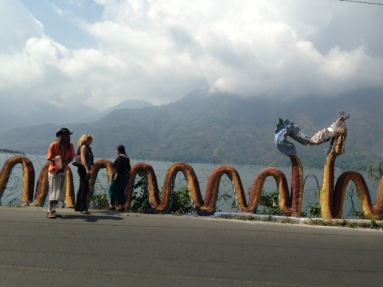 their home that is designed in the shape of two intersecting circles, and Caroline and he have even created two water dragons out of the trash that people were throwing on their land from the road that passes through it….They have built a sweat-lodge (temizcal), an exquisite, small structure with two living spaces, and their home using an inexpensive, sturdy, resource-saving technique they call “Super-adobe”, and are beginning to teach local people as well.

I am returned to the Ciudad after Atitlàn for another week of work. Women teeter their way to me in spike heels and Balenciaga, pouring horror stories like single-malt, neat and copious. Burning, tasting like the earth, the stories hit my belly and explode. “Assassination”, “firing squads”, “executions”, “torture” …. Words I have read, but rarely hear spoken, tumble out of the mouths of practically every. single. person.

Daughters of mujeriegos describe their daddies as charming and light-hearted – sweet Kings to their princesses, whose mothers were resentful Ice Queens. Divide and conquer at its finest. Separate daughters from their mothers; women from their bodies. Rags-to-riches testosterone-fuelled men leaving chaos in their wake: sons who can never, ever, fill their shoes and daughters who, despairing of finding anyone like Daddy, become their fathers’ sons.

The families of former dictators and military elite from all over Central America seem to have gathered in Guatemala City. I am deeply moved by these other faces of the fallout of hierarchical power. I touch each wrecked and armoured body, reaching for the trembling child inside with all the tenderness I am able. There is a long waiting list – I can not possibly see everyone…. A last meditation is held in what feels like the suburbs of the city, in a house bursting with art, overlooking a deep ravine with a lone volcano at its mouth – a place of indescribable beauty. I remind myself that when I meditated on the possibility of coming to Guatemala, I saw a Light beginning to grow within the City – one that needed to be nourished.  I touch as many people as I am able, and collapse on my arrival in Costa Rica.